The protest indicator is a tool for stakeholders who are underrepresented or have fewer means and powers available in a multi-stakeholder process. The protest option empowers stakeholders such as citizens or bottom-up organizations to influence high-stakes processes with other parties with greater resources. When implemented, the stakeholder has the option to pause the session, forcing the other participants to engage with them. This option is useful for:

When the button is clicked, the session will enter a paused state. The screen will turn black for all participants in the same team, and interaction with the 3D world is no longer possible. (Other teams, part of the same session, are unaffected.)

This Excel indicator can be downloaded from the Tygron Index. 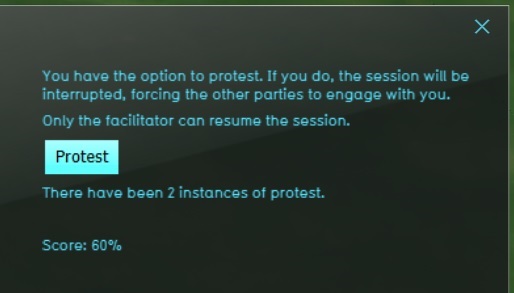 The indicator will count the amount of times a protest is triggered.

The indicator starts at 100%. The more often a protest is triggered, the lower the score of the indicator will be. By default, after 3 protests the score is reduced to 0%.

The protest indicator will work out-of-the-box. However, it must be opened at least once when it is added to the project to create the necessary globals to keep track of the amount of protests. While the test run is not active, select the indicator in the top bar of the interface to open the indicator panel. It will automatically configure itself. To check that this completed successfully, you can check for the existence of the global PROTEST_TALLY and PROTEST_TALLY_ID.

The indicator will automatically support Dutch and English, based on the project's language settings.

The following additional configurations can be made: