An action is an activity a stakeholder can perform to achieve their objective. A typical example of an action would be a housing corporation constructing social housing, or a water board realizing open water.

How actions relate to the Tygron Platform

When a user plans an action, it will influence the 3D World and have a certain effect on indicators. The effect of the planned action simulates the effect the action would have in the real world. When a stakeholder plants new trees, this action would have an effect on the Livability indicator. Actions are tied to specific stakeholders, referring to the capability each stakeholder has to influence the 3D World. The waterboard has the capability to create water, but not social housing or roads. Since a user can have a lot of different actions available to reach their objective, actions are organized into menus.

For more information about all the actions available in the Tygron Platform, see the list of actions.

Because there are various types of actions that could be made available, there is also a variety of effects that actions could have.

For changing the effects of the constructions on the indicators, see functions.

Examples of actions that do not place or remove an element in the 3D world, and thus do not have an associated construction action, include money transfer, buy and sell land, demolish, and the inbox. These actions are grouped together as Special actions.

Besides placing constructions, a user may also opt to upgrade buildings or place levees in the 3D world. These need to be defined before they can be added to a stakeholder's action menu. Upgrades always have a function associated with it, and levees can have functions associated with them. The effects of these actions depend on the functions, in a similar fashion as constructions.

Measures and events also need to be defined before they can be added to a stakeholder's action menu. Events simply cause other things to happen during the session when they are activated. Measures may have a variety of effects.

For each stakeholder, their actions are organized into menus. Similar actions, such as creation of infrastructure (roads, traintracks, etc) or housing (villas, apartments, etc), can be grouped together into the same menu. By roughly matching the actions in a menu to the indicators relevant to the stakeholder, it is possible for users to weigh choices of actions against each other easily.

Action menus can also be shared between stakeholders. This means that two or more stakeholders can have access to the same menu, and to the same actions within that menu. An example of a menu that could be shared among stakeholders would be a menu with financial actions, such as the ability to transfer money. Having a menu shared with another stakeholder has no effect on the usability of a menu or the actions therein.

In the editor, you can add, remove and reorganize actions and action menus in the project as desired. The panel required to make changes to the actions and menus is the "Actions" panel from the "Stakeholder" menu in the editor. 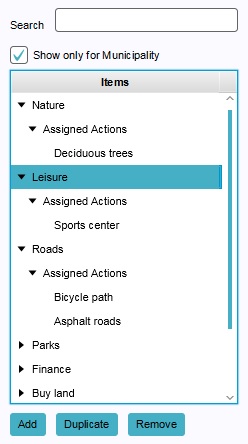 The left panel in the editor, when editing the actions.

How to add an action menu:

How to remove an action menu: 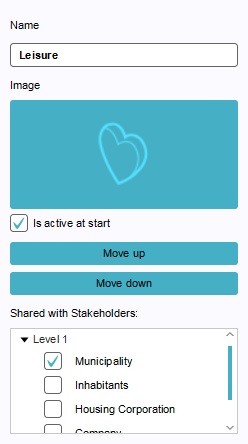 The right panel in the editor, when editing the action menu's.

When you select a menu, the right panel will automatically be filled with the information pertaining to that menu. A number of properties pertaining to a menu can be edited.

The field for the "name".

The Menu image is a visual representation of a menu. The menu image is used to group several actions into. You can change the image by clicking the Menu image and choosing an image from the list of images that appears.

The "Active" property dictates whether the action menu is activated at the start of the project. You can change this by checking or unchecking the checkbox

The buttons with which to alter the "order" of the menus.

The menu order defines the order in which the menus are being presented to the user. You can change the order by selecting a menu and pressing "Move up" and "Move Down".

The checkboxes for giving stakeholders access to the action menu. 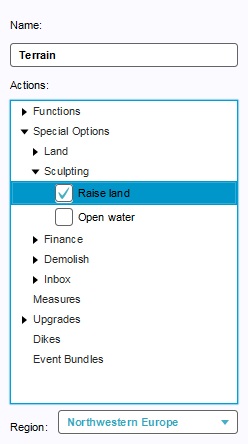 The right panel allows you to select actions for the menu.

To change which actions are included in an action menu, find the entry for the menu you wish to change, and select the sub-item "Assigned Actions". In the right panel, a list will be visible with several types of actions. Each action type can be opened to reveal either a sub-list of action types, or a list of actual actions. By checking or unchecking the checkbox next to an action, the action is either added or removed.

How to set the actions of an action menu:

There is a quick way to reach the checkbox for an action that is already included in an action menu. In the left menu, Under the assigned actions of an action menu, a sub-list is available of the actions included in that menu. By selecting an action in the left panel, the same entry is also automatically selected in the right panel.

A few action types may be empty: Measures, Levees and Event Bundles. These are all user-defined. If these have not yet been defined in the project, they cannot be added to the action menu's.