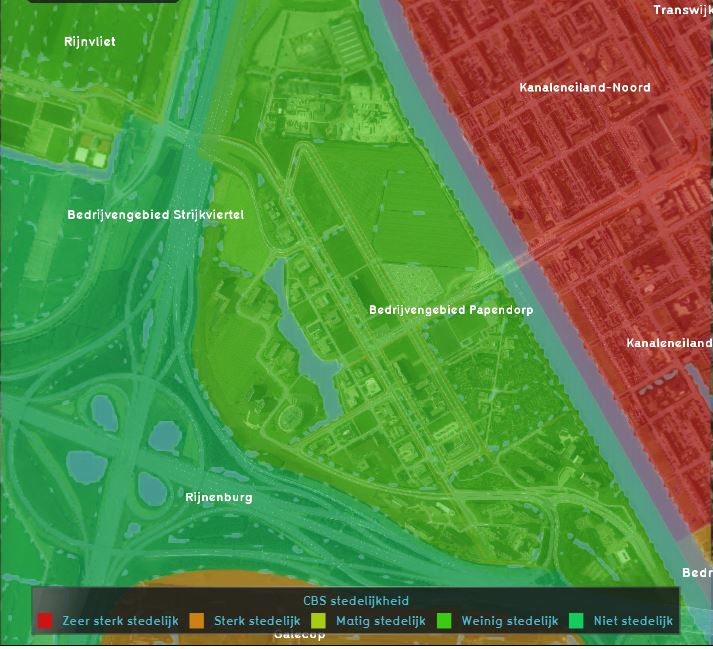 The Average Overlay of the urbanization attribute.

Another typical use-case of the Average Overlay is to visualize parameters of a simulation model (e.g. the rainfall overlay). A parameter assigned to a grid-cell can be related to one or more types of features in the project area: Buildings, Addresses, Terrains, Areas, Neighborhoods and Net Lines.

The Average Overlay of the urbanization attribute and additional information in the hover panel.

When clicking on a specific location in the map of the Average Overlay, the hover panel gives additional information over the actual value in that specific grid cell.

The Average Overlay works by first computing a grid of input values. This depends on the input;

Next, it depends on the operator configured for the Average Overlay what happens next: for each grid cell, the values of all cells within a given radius from that one cell are summed up, and divided by the total amount of cells found in that radius. The output value of that one cell is that computed average.

The Average Overlay can be configured to fine-tune the exact data which should serve as input, and how the calculation should take place.

The Average Operator determines how a cells value is calculated. The following operators are supported for the Average Overlay:

You can also configure in what way a value for this overlay will be selected:

The Average Overlay requires an initial input, which it can then average out over a specified range. The input can be either an Attribute of vector data, or a Grid Overlay. The following options are available:

Attribute First Layer
Use the first value found among the layers of vector data which have the specified Attribute. If no such Attribute exists in a specific location, the used value is 0.

Attribute Min Layer / Max Layer
Use either the lowest or the highest value found among the layers of vector data which have the specified Attribute. If no such Attribute exists in a specific location, the used value is 0.

Attribute Specific Layer
Use the defined Attribute's value from the specific layer of vector data specified. Exactly one layer can be specified. If no such Attribute exists in a specific location, the used value is 0.

The way of averaging is defined by several Attributes, and can most easily be set using the Average Overlay Wizard.

The calculation can be configured via the following attributes:

Input Overlays are Average Overlays that supply additional insights in the data used for complex Overlay models (e.g the Water Overlay or Heat Stress Overlay). Input Overlays can be made visible in the 3D Visualization by selecting them in the Wizard or adding them manually.