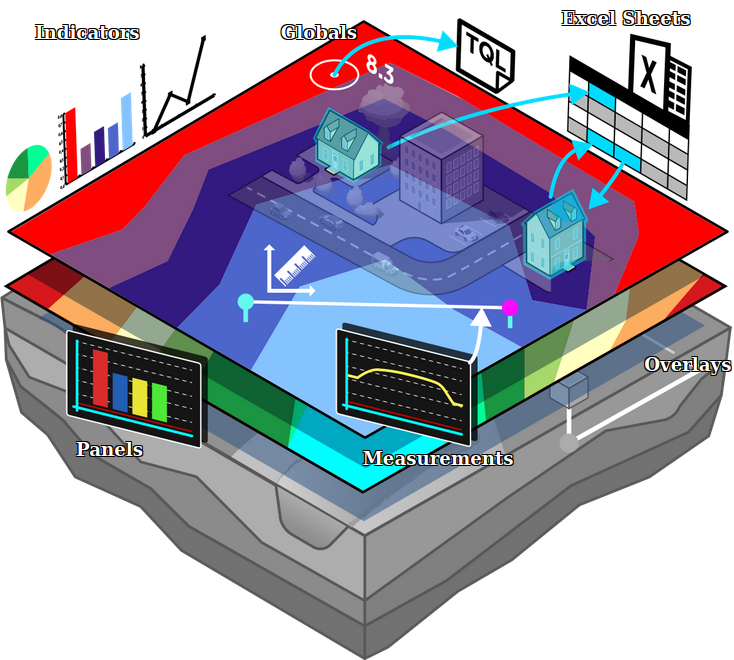 Overlay in comparison to Measurements, Indicators and Globals

Indicators are named after Key Performance Indicators, which serve as a means to identify potential improvements, and as a metric for the degree to which those improvements have been successful.

Indicators are visible at the top of the interface. Each indicator is represented by a short name, and (with exception of the budget) is accompanied by a small progress bar to indicate how well you are performing on that indicator. Indicators can also be inspected by clicking on its element in the top bar, which opens the indicator panel.

See also the F.A.Q. webinar for an explanation about Indicators.

By default, when adding an indicator, it is visible and accessible by all stakeholders, through an icon in the top bar. Access to an indicator can be restricted when it is made personal; a link to a stakeholder can be configured for an indicator. This stakeholder is then considered the owner of the indicator.

For more information on adding and removing indicators to stakeholders, see stakeholders.

This relationship between an indicator and its personal stakeholder can be queried using TQL:

During a session, users' actions can influence Indicators, directly by spatial adjustments and spatial TQL statements and indirectly through Grid Overlay results and subsequent Grid TQL statements. It is up to the users to adjust their actions to improve the score on their Indicators. Also note that an action can also have effects on personal indicators of other stakeholders. For example, if a project developer creates a large office park where there previously was a forest, the amount of green will go down, which will negatively affect the goals of a municipality.

The available default indicators are listed below. Some of these indicators already perform specific calculations and can be directly used in the project. They can also be modified and extended with adjusted calculations.

It is also possible to implement your own indicator, using an Excel file. This Excel file should be imported into your project and assigned to an indicator. Each added indicator is initially empty, and will require some work to set up, but it is highly customizable.